Skip to content
The article below, was published on – http://barbetchasseurfrancaisblog.weebly.com/bbblog/a-wet-and-water-dog-kennel-club-day-at-chatsworth
Last weekend I went to the Kennel Club event at Chatsworth House in Derbyshire
http://en.wikipedia.org/wiki/Chatsworth_House 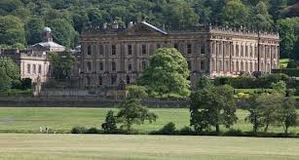 Chatsworth is the family seat of the Duke of Devonshire and has been the home of the Cavendish family since 1549!
This Kennel Club-organised occasion was centred around the International Retriever Team Event for which teams came from as far a field as Finland and Italy; in addition there were retriever and spaniel training days, Working Tests and a young handlers’ day. I went mainly for a different reason. As you may know, a while ago the Kennel Club introduced a new Gundog sub-group, the Utility Gundog sub-group, for the the Kooikerhondje, Spanish Water Dog and Lagotto Romagnolo as these breeds did not seem obviously to fit in any of the existing Gundog sub-groups. They subsequently changed their mind on this grouping and decided the breeds should be re-classified into the Utility Group. As far as I can see, the Kooikerhondje breed club appeared to accept this decision. The other two breed clubs insisted that they wished to continue to be classified as Gundogs and a practical assessment meeting was arranged between representatives of both breeds and members of the KC Field Trials Committee with a view to deciding into which of the Gundog sub-groups they should be placed. I was fortunate to be allowed to witness this assessment. I think there were 11 SWD and 3 Lagotti present. The assembled dogs had done different amounts of training and/or gun dog training but as far as I could ascertain very few actually worked on shoots.

On arrival everyone was welcomed by the Chairman of the KC Field Trials Committee. It had taken about 15 minutes to drive form the main House up to the Gundog event,  but then we all got back in our vehicles and drove another 10 minutes up to the moor (What wouldn’t I give for a “back garden” as huge as that!!!)The tasks set for the first part of the assessment were (one dog at a time) :

This was the part of the assessment for judging the spaniel and/or HPR attributes as far as I could tell.

We all then move to a slightly easier piece of terrain … grass, bracken and heather, but not tussocky.

Two dogs at a time time were called forward and were sat up each side of the ‘organiser’. They were allowed to be on the lead. Three dummies were thrown out into the area by a thrower ‘hiding’ in the corner of a spinny about 35-40yds down the slope. The handlers were told that these were ‘marks’ but this wasn’t really so of course, as the second one was not really a ‘mark’ but a ‘go-back’. It wasn’t explained why three dummies were thrown out for two dogs! One handler sent his/her dog and the second had to wait until the first dog returned with the dummy (or not!) to send his/her dog. Some ‘second dogs’ had to wait quite a while! 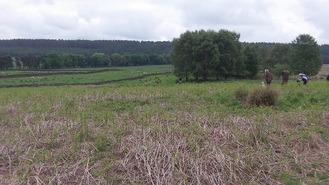 The marks …. if you look carefully, you can just see the dummy thrower standing at the corner of the spinney!

After this stage of the assessment up on the moor everyone drove back down to the HQ tent for lunch, chat and discussion. The entry to the field was fun (if you had 4×4!!) as it was about a foot deep in thick slushy mud! Going in was OK but coming out, up hill, was very dodgy sliding about as the gate posts were very substantial ones made of stone!! Not a venue for the car-proud or the 2×2!!

The morning session had taken far longer than expected (due to various reasons I won’t go into!) so sadly I was unable stay for rest of the afternoon as I had over a three hour journey ahead of me. However after lunch, the dogs were assessed on water retrieves which, I understand, were impressive …. no surprise there then!!!

It was a great day in a fabulous venue and I thoroughly enjoyed meeting a group of friendly and welcoming people. I learnt quite a lot more about the breeds and found everyone very willing to talk about their breed and their dog(s). Well done to all those dedicated SWD and Lagotto Romagnolo owners who are determined to keep their breeds in the Gundog Group. Only by getting out there and working our (minority breed) gundogs in the field will we be justified in demanding they be included in the Gundog Group. It will be interesting to see in which of the gun dog sub-groups these two breeds will be placed. Watch this space!!

This also applies to the barbet of course, which is why I was interested in attending the day, and should be borne in mind for the future.

NOW is the time that barbet ‘breeders’ and owners should be training their barbets in gundog work even if they do not want to go on a shoot. In my opinion there should be a decision (ahead of any application for breed recognition) on which sub-group the barbet should be placed in. If this decision is not taken, a similar day to the one I witnessed might be needed and the barbet might end up like the Kooikerhondje, and no longer be classified as a Gundog. Surely we owe the barbet more than that? If not, nobody has any business promoting the barbet as a working gundog which continues to happen at the moment in spite of the tiny number of barbets actually trained as working gundogs!!!