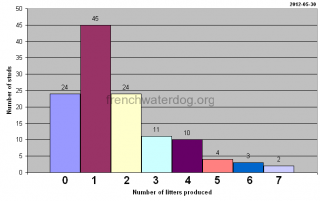 Best way to verify rumours is to make calculations. One could ask how many studs we can choose from those that were used less frequently then three times (why three?, You will get the answer at the symposium) Answer would be 98 from total 123 confirmed and ready to use studs.

There are 123 studs, ready to be used as we speak. This figure is for sure under evaluated, there are studs out there not listed on breed club sites (if You have such stud, contact us), some are in the process of receiving permissions from kennel clubs. Is it few? 24 of those studs were never used, 45 of them were used only once, another 24 used for two times. You have plenty too choose from before You go to those used three times or more, don’t You?

“ARTIFICIAL INSEMINATION
13. Artificial insemination is not to be used on animals which have not reproduced naturally before. Exceptions (either the male or the female has not yet reproduced naturally) can be made by the national kennel clubs in certain cases” from INTERNATIONAL BREEDING RULES OF THE F.C.I.