First one is height of the dogs (for those who don’t remember male:58-65, females: 53-61) , it is a common knowledge that between the actual standard and the actual height of dogs around there is a huge gap. Mediana height of males (155 males are included, heights were taken from club sites and sent by owners and includes almost 110 active studs)  is 58 cm, while females’ (96 counted) is 53 cm.  Of course when You compare the results with Gaussian distribution it is easy to see that there is a pattern that suggests that f.e. many males with 57 cm were given additional centimeter to made them fit to the standard. In normal situation, logically thinking person would postulate lowering (especially when Barbet struggles with diversity due to small numbers) the height limits by such numbers that actual average height of the dog would be precisely in the middle of projected values, to cover as wide population of dogs as possible. Idea would be to lower the height exactly by three or four (even better) centimeters (with current heights,  average male should be 61,5 cm , in fact average male is 58 cm , 3,5 cm is the difference )  giving us such values :

This is what You would expect from normal reasoning. The problems starts when expert doesn’t really care about the breed, and holds in deep regard all the dogs that doesn’t fit his idea. Forced to change the height, he/she/them changes only maximums…..without touching the minimums. The projected heights are: for males 58-61, females 53-56. Bravo, in momentum when the breed is running in low numbers, make the requirements for the dogs harder and narrow the population of breeding dogs, what a big mind you must have to come to this idea !!!

The things gets really idiotic…when our long coated breed gets a limit of length of the coat….Yes You’ve read correctly, it is not a joke expert wants  Barbet – the breed recognized for its long coat (it is said six times in the standard) to have in projected modification a maximum(sic!) length of coat 10 cm. Probably Barbet will became a phenomenon in dog’s world, as the only long coated breed to have  set length of coat. Basically it means that our dogs will have to be regularly shaved or trimmed to keep their coats below 10 cm . If 10 cm is a long coat, so 9  or 8 is too…..so where too short starts? Below 1cm? Expert doesn’t care or say. Exper of course holds in big regard the cynological culutre of breed’s domestic country.  Professeur Guy QUEINNEC (Docteur Vétérinaire, Professeur de Zootechnie à l’Ecole Vétérinaire de Toulouse ) in his book “Connaissance du chien”, writes that long coat means nothing else but lenhts between 10 and 15 cm, and as an example of such coat professour gives….Barbet.

Usually when I get such idiotic and pathetic (there is no other idea behind this other than eliminating blood again) thing into my hands, I’ve unstoppable need to get the source. Well this time it was impossible and the only thing I was able to find is the first name or nickname of the author, left in properties of the file. Any idea who that might be? First name is not enough to say. 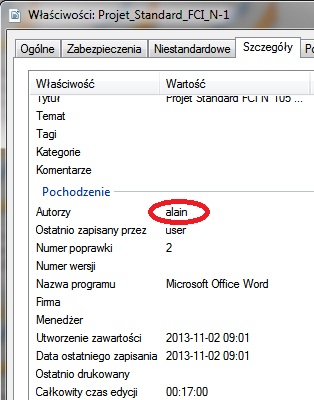 Standard is going to be changed in 2016. Three years  You say is a lot…..well it is 2013 now, and modification is not yet official subject….but our mysterious alain already made the project and shared it with others. Do you really think You have three years?

Cui Bono, search for males between 58-61cm, with short (yep, use Your common sense -below 10cm coat is short) coat (extremely frizzy one that will never grow more). There are not many alains in our breed, few of them happen (of course by pure accident) to own the males that idealy fits the projected narow margin of acceptable sizes.

PS. Fortunately the new Comitee of the French Barbet Club will not support this modification.