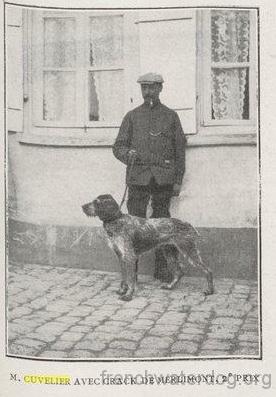 This is M. Eugène Cuvelier, one of the first active breeders of Barbets in the end of XIX century (second was M. Arth). He was a breeder of ROSE and NELL and several other Barbets (listed here – and still under construction  – Historical representatives of the breed).  Cuvelier was also  involved in breeding of other Griffon breed – Khortals. Photo was taken in 1904 for “Le Sport Universel illustre“.

The dog on the photo is  a Griffon a poil dur.