This international group of people have been tied together by a common goal and purpose. Our goal is to work together, with the Barbet as our priority. People will come and go, but the Barbet, who has endured history thus far, will continue to do so. We strive for, as breeders, to produce not quantity, but quality dogs, with as much homogeneity and also genetic diversity as we are able to. The Authenticity of the breed comes from using the past – knowledge, understanding, and truths.  This can only be accomplished by cooperation and trust.

As Sir Winston Churchill said, “Those who fail to learn from history are doomed to repeat it.”  This group values the breed’s history.  The recent history (the past 80 years) is critical to breeding healthy, morphologically correct dogs with sound temperament, good instincts and fewer surprises — that conform to the standard.  We can learn from the successes and failures of those who have championed the breed before us; Mr Robert Le Houelleur, Dr. Charles Vincenti, Madame Helene Petre, Mr. Ranier Georgii.   We are grateful to those who made careful choices with small populations.  We see the descendants of their selections popping up in litters today.

Photos and paintings speak volumes.  One can see that the dogs have changed since 1930’s and 40’s when they still resembled the dog’s image in the initial standard filed in the 1886.  Knowing the historical form and function of the Barbet is good information for current breeding plans.  We can honor the past and still breed authentic dogs within the current FCI standard.

The Barbet is a French water dog and the breed’s name “Barbet” comes from the French word barbe, which means beard. 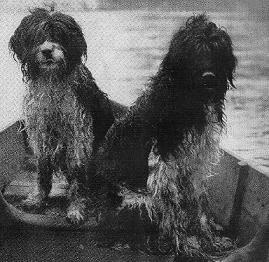 References abound to the Barbet’s intelligence, and fearlessness of cold water. The Barbet was used for waterfowl hunting to such a degree that a saying of the day was “Muddy as a Barbet”, referring to the dogs appearance after hunting in the marshes. However, from the beginning, this natural breed exhibited a loyalty and friendliness that made him a breed of choice.

The Barbet has been used in breeding several breeds, for example the Briard, French Poodle, Bichon Frise, and the Newfoundland. 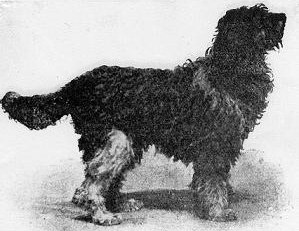 Today, the Barbet, although rare, with fewer than 2,500 worldwide, continues to amaze people around the world with its fierce loyalty, versatility, and incredible intelligence.

The Barbet is an integral part of dog history. The nature of the Barbet has meant its survival, and some of today’s Barbet still have the assets, instincts and natural abilities attributed to it from the past.